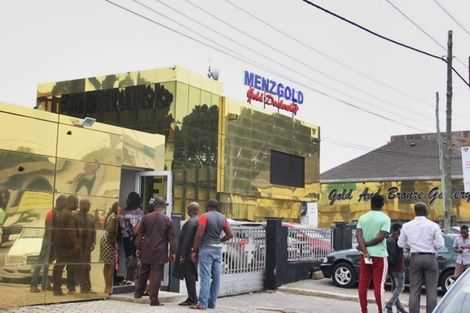 “I have never said I’ll pay Menzgold customers,” he said.

According to him, it is unclear how much is owed Menzgold customers, as such, it will be premature to promise to pay them back their monies.

He however explained that his government would investigate the extent of indebtedness and take remedial actions to alleviate the suffering of the customers.

John Mahama made this known in an interview on Starr FM, Tuesday, November 3.

“Menzgold is a different kettle of fish because we don’t know the extent of what the indebtedness is. I’ve not seen any document that shows that this is how much it is. So unless you investigate and find out.

“It looks like this government has been reluctant to investigate it or even go after those who took people’s money in the fraudulent manner. And so I said when we come we’ll pursue and find out what the true facts are and we’ll take remedial actions to alleviate the suffering of the customers,” he said.

He stated that his government would find out what assets of Menzgold are available to be sold to pay back some of the monies that are owed the aggrieved customers.

“What are the assets of the company? Are there any hidden assets that you can lay hold of and dispose of and pay back some of the monies that are owed. And the point is, why should people who have perpetrated something like this just walk away without any inhibitions?” he said.

John Mahama however expressed his willingness to pay the remaining funds of those affected by the savings and loans sector clean up.

According to him, since the Finance Minister, Ken Ofori-Atta says he has paid 98% of depositors, his government is going to pay the remaining 2 percent.

“The finance minister put a cost of 22 billion and he says he’s paid 98% of them. That’s what he says and so if 2 percent have not gotten their money when we come we’ll pay them,” he said.

US Govt. Introduces New Rule For African Tourists; Travelers May Be Required To pay $5,000 Refundable Bond

US Govt. Introduces New Rule For African Tourists; Travelers May Be Required To pay $5,000 Refundable Bond

Don’t Rely On Your Free SHS; EvenNkrumah Was Overthrown – Kwesi Pratt To NPP

Member of Parliament(MP) for Assin Central, Kennedy Agyapong says he was joking about Mahama’s relationship with Tracey Boakye. According to him, every man on earth...
Read more
Load more

US Govt. Introduces New Rule For African Tourists; Travelers May Be...