Popular Ghanaian comedian, Funny Face, has publicly announced that Togolese footballer, Emmanuel Sheyi Adebayor, has gifted him another brand new vehicle after the previous one got damaged in a near fatal motor accident that occurred on August 29, 2021.

It can be recalled that Funny Face earlier announced that the Porsche Panamera which Adebayor got him sometime in 2020 has been involved in a motor accident.

He said in a bid to escape the accident, the four tyres of the vehicle got burst and his rims have been severely damaged.

But today September 1, 2021, fans woke up to the news that Adebayor has replaced the damaged vehicle with another luxurious vehicle.

Funny Face who could not hide his excitement posted a video of a new jeep wrangler with the caption;

“Don’t mess with one of Jehovah’s son. His comeback will always be bigger Dan when HE started. !! Adebayor Adebayor. You have done it again ooo .Saaaawwww. obooooiiiiiiiiii. Higher we go bro. From da ashes, we will rise again. Now is time to give dem Rashes!! Baaarrrrrssssss ma Nigga For Life is For Life.”

This is the third time the Togolese footballer has freely given out a vehicle to Funny Face as sometime in 2012, he gifted the comedian a customized Range Rover.

The two have had a strong and enviable friendship which many seem not to understand. 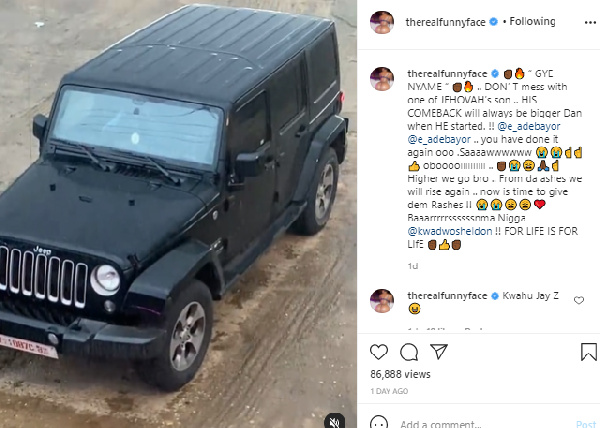