COP Kofi Boakye expressed worry over demands some celebrities made during a meeting  the Ghana Police held with creative industry players on Wednesday.

During the open forum meeting organised by (IGP), George Akuffo Dampare, some celebrities who were present complained about mishandling and inappropriate treatment from some police personnel.

According to them, they deserve some privileges befitting their status as celebrities but COP Kofi Boakye thwarted the opinion and pointed out that no one is above the law.

“I want to say that the sense of entitlement of celebrities is becoming overwhelming. And I just don’t get it. Some of the things that you do are disgusting, truth be told. If we cannot arrest pickpockets, we cannot arrest armed robbers. No one is above the law. When you fault it, and the law has to deal with you, we will. So, that it will deter others,” he said. 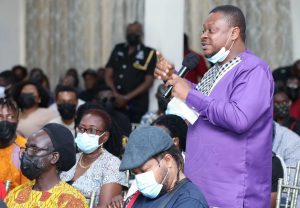 He continued that “if you want privileges, what privileges do you want? That you can pull a weapon anytime, and nothing would be done to you? No, that is not possible. We cannot do that.”

The outspoken senior police also noted that there is a need to clarify who a celebrity is and who deserves that title.

“Who is a celebrity? What is the operational definition of the word celebrity? I think we should get that because I am confused. We are confused. Is it that when you appear in one film, or you do one song, you qualify to be called a celebrity or what? And you see, because we are confused, we do not know what you want,” he said.

The meeting was held at the Police Headquarters in Accra on Wednesday, November 10 with some senior police officers in attendance.