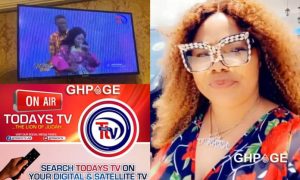 The channel, together with Ice1 TV which she also owned, was shut down by the National Communications Authority (NCA) in April for operating without a valid license contrary to Section 2(4) of the Electronic Communications Act 775 of 2008.

The converted fetish priestess who was known for her money doubling ritual, ‘sika gari’, was subsequently arrested and charged on two counts.

Announcing the new development on social media, Agradaa took to her Instagram page to share posters unveiling her channel’s new name while urging viewers to rescan their digital and satellite TV sets to access it.

Nana Agradaa is set to host her first show on Friday, September 17, 2021, alongside Big Akwes.

Watch the video below

In April, the NCA embarked on the operation with a joint team of Police and National Security Intelligence Operatives, to clamp down on television channels without legal rights to broadcast.

The NCA’s operation was undertaken on the heels of the gruesome killing of an 11-year-old boy allegedly by two teenagers for money ritual purposes.

Like Loading...
Tags: Nana Agradaa jubilates as her Thunder TV station goes back on air as Todays TV