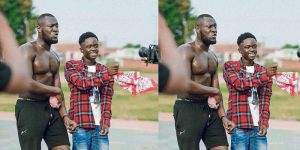 The VGMA Hip Hop song of the Year winner was quizzed on how he was able to garner 1 million views with his ‘Sore’ remix in just three days.

In response, Yaw Tog indicated that he already knew that would happen considering the effort he put in.

He was also quizzed on whether he had been hyped by Stormzy or not. To this, Yaw Tog said he was very privileged to have Stormzy on his song as that helped to increase his popularity.

He however also indicated that his collaboration with Stormzy did not only help him but also went a long way to increase the popularity of Stormzy in Ghana.

Tags: Nobody In Ghana Would Have Known Stormzy If Not For Me – Yaw Tog