The dead include 5 females and 7 males. Their bodies have been deposited at the Cape Coast teaching Hospital Morgue for autopsy. Another person was severely injured in the accident. 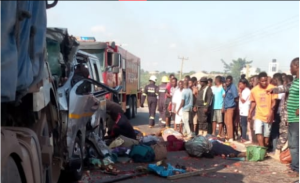 According to eyewitnesses, the DAF trailer that was fully loaded with bags of cement was heading towards Takoradi whereas the Toyota Hiace bus was heading to Kumasi from Takoradi.

The articulated truck allegedly overtook a vehicle in a poor visibility area due to smoke from a burning bush and as a result, colided with the Toyota Hiace bus.

The Ghana National Fire Service reports that they received the distress call at 15:50hrs from a Police officer and their rescue team was quickly dispatched to the scene from the Elmina Fire Station.

The Fire Service team extricated the victims with the aim of searching for survivors.

According to them, they found only one person alive. Meanwhile, the whereabouts of the driver of the DAF Truck is yet to be known.