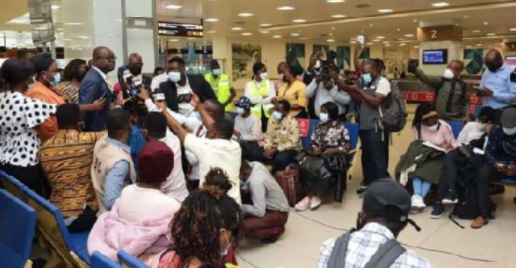 They were welcomed at the airport by the Minister of Foreign Affairs and Regional Integration, Ms Shirley Ayorkor Botchwey, and her deputy Mr Kwaku Ampratwum-Sarpong.

Mr Ampratwum-Sarpong told the media: “The government has made plans to evacuate every student or every Ghanaian who is prepared and ready to come home.”

He said the government has liaised very well with Qatar Airways and Turkish Airlines and “we have agreed that any Ghanaian who has crossed to any of these countries where they do fly, will be flown home within the next couple of days.”

“It is important that we all do remember them in our prayers that the Good Lord will deliver them safely to a safe shelter and eventually back home to Ghana.”

Meanwhile, Some Ghanaians residing in war-torn Ukraine have indicated their unwillingness to come back home, Minister of Foreign Affairs and Regional Integration Shirley Ayokor Botchwey has disclosed.

According to her, the government is willing to evacuate Ghanaian nationals who are willing to return home at no cost to the beneficiaries.

The minister also said, as of 28th February, about 527 Ghanaian nationals have crossed the Ukrainian border to various neighbouring countries and they will soon be in Ghana, as long as they are willing to be evacuated; it will be at no cost to them.

she reiterated that there are some students who have indicated that they do not wish to come back home adding that, after a couple of days, they will be on their own because the government cannot cover those people forever.

Russia launched an attack on Ukraine for their decision to join NATO, which will allow NATO to get uncomfortably too close to Russian territory. The world has condemned the Russian attack and called on their president Vladimir Putin to end the attacks and resort to dialogue.