Four persons are battling for their lives after they were ran over by a truck at Nkotompo in the Sekondi-Takoradi Metropolis of the Western Region.

The truck carrying bags of sachet water rammed into a provision shop on Tuesday morning before causing harm to the persons.

An eyewitness told the media that the truck with registration number GX 06 – 15 failed its breaks which resulted in the accident. 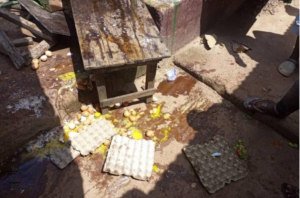 The four persons sustained various degrees of injuries and rushed to health facility as others had their kiosks and properties destroyed.

Fortunately, no death was recorded as the victims were rushed to the Effia-Nkwanta Regional Hospital in Sekondi to receive treatment.

The truck has however been towed to the Sekondi Police Station and impounded.