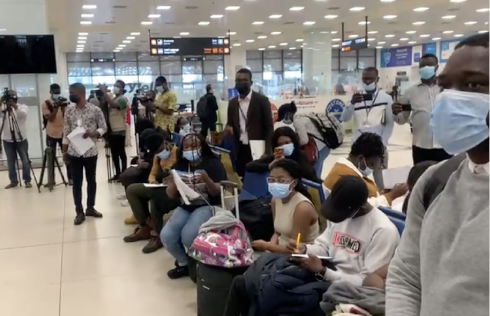 Ghanaians caught up in the Ukrainian crisis have arrived home from Romania, where they sheltered.

The 54 Ghanaians arrived on Monday morning and were received by a government delegation the Kotoka International Airport.

The first batch of Ghanaians who got caught up in the Russian invasion returned home through efforts of the foreign affairs ministry on March 1, 2022.

Fifteen Ghanaian students refused to return to Ghana, although government provided air tickets for their trip.

The Deputy Minister for Foreign Affairs and Regional Integration, Kwaku Ampratwum-Sarpong, has revealed that some students who were originally scheduled to travel decided that they were not coming.

The minister Explained that the students have been given various offers in Hungary for them to continue their education.

He said, there are schools in Hungary, who have expressed their willingness to offer accommodation and tuition to the Ghanaian students, hence their refusal to join the evacuation flight.

The Minister added that the parents of some of the students have approved their wards’ decisions not to return to Ghana.