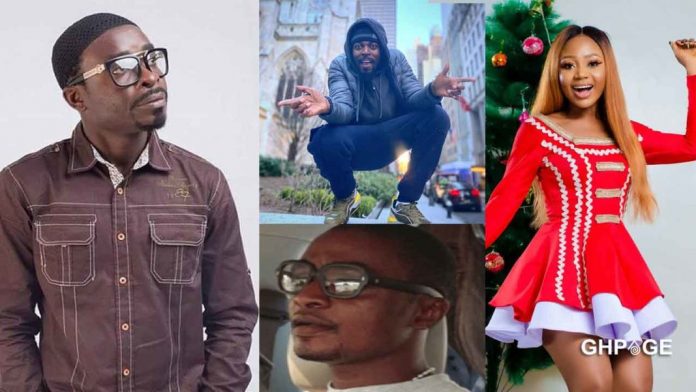 GhPage brings to you 8 Ghanaian celebrities who for some reasons served jail penalties for a crime committed amid their career. Check the list below;

She was jailed in Ghana over a nude photo with her 7-year-old son on social media to mark his 7th birthday.

This picture sparked an outrage on social media where some netizens and celebrities called on the authorities to deal with Akuapem Poloo.

A Child’s Right Activist group, Child Rights International, therefore sued the actress for sharing such an explicit picture and putting her son in danger.

She was then convicted by the Accra Circuit court on Wednesday 14 April 2021 after she pleaded guilty to charges against her.

Despite the various plea on social media #FreeAkuapemPoloo by celebrities, political leaders and the cry of her mother on a radio interview following her conviction, Rosemond Brown was on Friday, 16th April 2021 sentenced to 90 days jail term.

Ghanaian based US rapper Samuel Safo popularly known as Showboy, CEO of 2Hype Gang was jailed in March 2019 for stabbing Junior.

Showboy sometime in 2017, got into a fight with Junior, Shatta Wale’s friend and in the fight, he stabbed him in the stomach. He is currently serving 6 years in prison in the USA.

Kwaw Kese born Emmanuel Kofi Botchwey was arrested on November 22, 2014, in Kumasi publicly smoking a substance alleged to be Indian hemp in the company of some friends.

Kwaw Kese was remand by the Kumasi Metropolitan Assembly (KMA) Circuit Court for over a month at the Kumasi Central Prison before he was bailed on December 30, 2014.

The rapper was subsequently sentenced to a day’s imprisonment and a fine of GHc1,200. He paid the fine and served the one-day jail sentence.

Daasebre Gyamenah was a Ghanaian highlife musician. He was arrested by security and customs officials, for owning substances suspected to be cocaine, when he arrived from the British Airways flight from Accra.

Reports from the Heathrow Airport indicated that on their routine checks on passengers arriving at the airport, customs officials, aided by sniffer dogs, picked out the suitcase of the Ghanaian musician.

Daasebre Gyamena had in his possession two kilogrammes of the suspected substance concealed in his suitcase. The street value of the substance was about £100,000. He was released from jail in 2007.

Ghanaian Hiplife Musician Deeba was arrested by Interpol in 2013 for allegedly defiling his 8-year-old stepdaughter in the United Kingdom-UK.

It came out that, popular investigative journalist, Anas Aremeyaw Anas teamed up with officials from Interpol and the Ghana Police Service to arrest him.

Deeba was arrested at the La Palm Royal Beach Hotel in Accra during an undercover operation.

Ibrahim Sima was the Chief Executive Officer of the Exopa Modelling Agency. He was one of the most influential fashionistas in the country.

The one-time star was arrested in the September of 2009 at the Kotoka international airport carrying a substance believed to be weed into the plane.

The drug was hidden in four tubers of yam. Although he denied knowledge of the drugs, he was jailed for 15 years and died in 2014 at the Nsawam prison.

Nana Akwasi Agyemang popularly known as Geeman was one of Ghana’s finest instrumentalists, dancers and musicians. Geeman was the Ghana version of Micheal Jackson.

Geeman and Jagger Pee in 1995 were jailed after Geeman shot a taxi driver to death.

He (Geeman) was sentenced to death by hanging in 1995 and was released by a presidential pardon granted him in 2009 by then-president Kufuor.

He spent 14 years in jail and is currently a pastor.

Jagger Pee, on the other hand, was sentenced to life imprisonment for abetment to crime

The CEO of Goodies Production, Isaac Abeiku Aidoo was arrested at the Kotoka International Airport on 23rd April 2008 for trying to sneak a substance believed to be Cocaine (80 Pellets) into the United States.

The popular music producer was sentenced to 13 years imprisonment by an Accra Circuit Court and was released in 2014 after serving 6 years at the Nsawam prison.

Mr Isaac during his reigning times was probably one of the most effective, productive and influential music producers in Ghana in the early 2000s.

Shakira may face trial in Spain for allegedly avoiding £13million worth of tax. Spanish prosecutors accuse the 44-year-old Colombian singer of six offences, which could...
Read more

Shakira may face trial in Spain for allegedly avoiding £13million worth of tax. Spanish prosecutors accuse the 44-year-old Colombian singer of six offences, which could...
Read more
Local News

Hassan Ayariga under life support as he contracts coronavirus (Photo)

The founder and leader of the All Peoples Congress (APC), Mr Hassan Ayariga has been admitted to the Intensive Care Unit of a health...
Read more
Local News