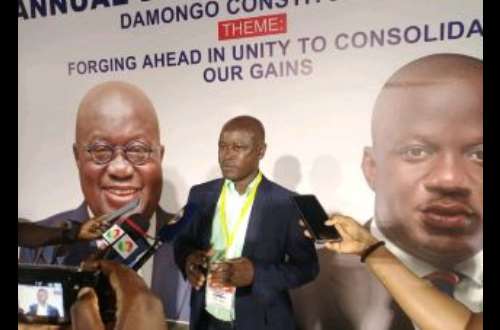 The Communications Director for NPP in the Damongo constituency of the Savannah Region, Mr. Iddrisu Laminu says the Member of Parliament for the area, Lawyer Abu Jinapor deserves another term to do more.

He said this at the party’s annual delegates conference held at the forefront of the MP’s office in Damongo yesterday, August 3, 2021.

According to him, the achievements of the Member of Parliament who also doubles as the Minister for Lands and Natural Resources in his first year into the four-year mandate are unprecedented, unmatched and historic in the constituency.

He touted the provision of Agric inputs and free ploughing for farmers of the area, disbursement of funds to women groups to access basic capital, drillage of over 18 mechanized and hand-pump boreholes, the recruitment of the youth into the various security forces and a support to tertiary students with various sums of monies to mitigate their fee payments as “some of the achievements from the lots” he has chalked as a first time MP.

He further revealed that unlike the NDC, the rank and file of their party is united which is an integral component in winning elections as a political party.

He urged the constituency executives, electoral area coordinators, sympathizers and party foot soldiers to remain resolute and focused in their bid keep the seat as long as they desire.

He further urged the other constituencies to work hard to make Savannah Region a home for the NPP in an attempt to break the eight year electoral cycle to keep NPP in power come 2024.