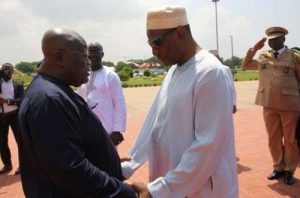 President of Ghana, Nana Addo Dankwa Akufo-Addo, condemned the coup d’état that toppled the democratic process in the Republic of Guinea in a statement on Sunday.

He described the action as a clear violation of the ECOWAS Protocol on Democracy and Good Governance, demanding for the immediate return to constitutional order.

President Akufo-Addo, who is also the Chair of the Authority of ECOWAS Heads of State and Government, said ECOWAS demands the immediate and unconditional release of President Alpha Condé as well as other arrested officials.

“ECOWAS notes with great concern the recent political developments which occurred in Conakry, Republic of Guinea. She condemns with the greatest firmness this coup attempt on Sunday, September 5, 2021.

“ECOWAS demands respect for the physical integrity of the President of the Republic, the Professor Alpha Condé, and his immediate and unconditional release as well as that of all the personalities arrested.

“ECOWAS reaffirms its disapproval of any unconstitutional political change. She asks the defense and security forces to remain in a posture Republican and expresses its solidarity with the Guinean people and Government,” Akufo-Addo stated.

In a statement on television on Sunday morning, a military group announced the seizure of power and the suspension of the constitution in Guinea, West Africa.

The announcement came just hours after an intense firefight broke out near the presidential palace in the capital, Conakry. The France-Presse agency reported that the coup leaders arrested President Alpha Conde.

“I am personally following the situation in Guinea very closely. I strongly condemn any takeover of the government by force of the gun and call for the immediate release of President Alpha Conde,” United Nations Secretary-General Antonio Guterres wrote on Twitter.

At the top of the military group behind the coup is an army colonel, Mamadi Doumbouya. Conde’s position was not immediately disclosed and Doumbouya made no mention of the 83-year-old president, whose popularity has plummeted since he tried to get elected for a third term. “The personalization of political life is over. We will no longer entrust politics to one man, we will entrust it to the people,” Doumbouya said, adding that the land borders are closed and that he overthrew the government and captured President Conde due to the” mismanagement “of his government.

Doumbouya is a former officer of the French Foreign Legion: he was appointed head of the special forces by Alpha Conde.

Conde was sworn in last December for a third term. He came to power in 2010. However, the 83-year-old president has increasingly repressed his political rivals as the opposition against his government has grown. In 2011, he survived an assassination attempt after gunmen surrounded his home at night and hit his bedroom with rockets and grenades.