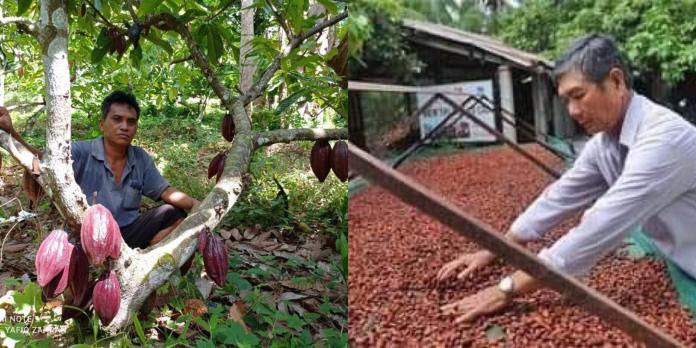 A report by China Daily indicates that South China’s island province of Hainan has exported cocoa beans to Belgium for the first time, according to the Chinese Academy of Tropical Agricultural Sciences (CATAS).

“Cocoa is a raw material for making chocolate. With the increasing demand for chocolates, Hainan has been expanding its cocoa planting area and making breakthroughs in technological development,” said Hao Zhaoyun, a researcher with CATAS.

“As Belgium is dubbed ‘kingdom of chocolates,’ exports to the country indicate that our cocoa production standards have been recognized by the international community,” Hao added.

Cocoa is mainly produced in tropical regions such as West Africa. Hainan is the most northerly cultivator of cocoa in the world.

Ghanaians reaction to the development

As it stands, Ghanaians on social media have expressed shock at this new development.

Many are of the view that with how China is good at kicking other countries out of business, they might end up killing the dominance of Ghana and Ivory Coast in the Cocoa market — since these 2 countries produce 60% of the world’s cocoa beans.

Reacting to the news, Jennifer Nimako Boateng said:  “It is terrifying, the prospect of having China in the game. We know how they play; they don’t relax till they dominate. Ghana can kiss its cocoa edge goodnight soon….”.

Another Ghanaian by the name Kojo Zer said: “Trouble for Ghana and Ivory Coast”.

Ralph Ofori-Adeniran, a Ghanaian journalist based in Germany lamented that Ghana and Ivory Coast would start importing cocoa beans from China to increase their production.

In his words: “Very soon Ghana and Ivory Coast will start importing cocoa beans from China, because China has started producing cocoa!…

Although COCOBOD expressed concern about the development, it nevertheless said it was too early for the country to panic.

“We are concerned, but it is too early for anyone to start panicking because if you look at the quantity of cocoa that has been exported by China, it is quite small and less than one tonne.

“We are concerned due to the fact that if production is increasing at a time when consumption in the world is not increasing, then obviously it will have an effect on the price,” the Senior Public Relations Officer (PRO) of COCOBOD, Mr Fiifi Boafo, told the Daily Graphic in an interview on the sidelines of a meeting between COCOBOD and some local cocoa processing companies in the country in Accra yesterday.