Driver shoots painter, then shoots himself to avoid mob attack 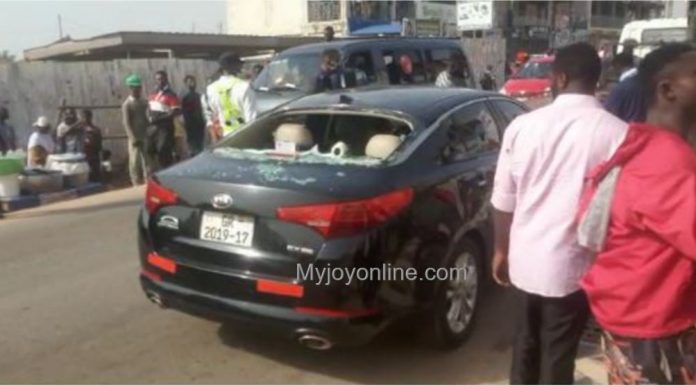 driver of a KIA saloon vehicle has shot himself after shooting a man who warned him against careless driving at Ayeduase near Kwame Nkrumah University of Science and Technology (KNUST).

The victim, Amoah who is a painter, was shot three times in the stomach after returning a slap from the driver.

The driver, according to the eyewitnesses, was quarreling with a woman who sat in the front seat of the vehicle.

He shot himself after he was surrounded by the police who had rushed to the scene to prevent a mob action.

Amoah, had moved in to tell the driver to drive cautiously on the busy road when he was caught in traffic.

The two who are in critical condition have been sent to the Komfo Anokye Teaching Hospital for medical attention.

The body of a missing woman has been found in a bush at Antoa in the Kwabre East District of the Ashanti Region in...
Read more
Local News

The body of a missing woman has been found in a bush at Antoa in the Kwabre East District of the Ashanti Region in...
Read more
Local News

No Lockdown fears as President Akufo-Addo set to Address the Nation Tonight on Measures taken against COVID-19.

The Address coming up Tonight 28th February at exactly 8:00 pm is the 24th time the President is taking such step to let the...
Read more
Local News

The woes of convicted gangster, Prince Adu, who was caged for a total of 39 years by the Ho Circuit Court for two robberies...
Read more
Load more

STop exploiting the Kumerica brand for your selfish gains – Okyeame...

Kuami Eugene sometimes does not know how to talk – KiDi