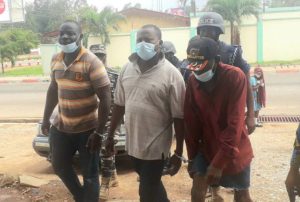 The three accused persons are; Fuseini Alhassan, butcher, Ibrahim Issaka, also known as Anyaase- ticket seller and Iddi Mohammed, also known as Chuburos, a blacksmith and a brother of the deceased activist.

They have been charged with conspiracy to commit crime and murder, contrary to Section 46 of the Criminal Offences Act, Act 29 of 1960.

This is the second time in a month that the court has remanded them. They made their maiden appearance in court on July 2, 2021. They are expected to reappear in court on August 12, 2021.

Setutsinam Anaglate of Anaglate and Associates law firm addressed the court as counsel for the 3rd accused person, Iddi Mohammed.

This followed a Notice of Appointment of Solicitor dated July 21, 2021, served by Anaglate and Associates, to the Asokwa District Court.

The law firm, through writing, has since asked to be furnished with copies of all court processes on the docket titled, “Republic Vrs Iddi Mohammed and 2 Others”.

Mr Iddi, who was arrested on June 30, 2021, at his Ejura Dagomba Line residence at about 9:00 a.m, was without legal representation when he made his maiden appearance with two other accused persons.

At Thursday’s hearing, the prosecution, led by Chief Superintendent Kofi Blagodzi, prayed the court to remand the accused persons into Police custody to enable them complete investigations into the murder of the late Kaaka.

Counsel for suspect Mohammed, however, did not oppose the plea of the prosecution, for remand of the accused.

The prosecution promised to inform the court about the outcome of Police investigations.

The court, presided by Her Worship, Akua Adu Boahen, remanded the accused into Police custody to reappear on August 12, 2021.