Victor Kwadjoga Adawudu, Counsel for Corporal Seidu Abubakar and Lance Corporal Ali Solomon, who are standing trial with eight others over an alleged coup plot told an Accra High Court that his clients had gone to work at the time the prosecution’s star witness claimed he captured them in a video concerning the plot.

“I am suggesting to you that the day and time you want this court to believe they came to the meeting, they had gone to work,” the lawyer said.

Staff Sergeant Sule Awarf, the star witness debunked the claim saying, “It was afternoon time and they came to the meeting”.

Defense Counsel explained that granted that they were at the Next Door Beach Resort where the alleged meeting was held, the place is a public place and people go there to have a drink.

“That is not true. If he came to have a drink, how come his picture is in the video and his name appeared in the attendance list,” Sule retorted.

“I am also putting it to you that the mere presence of Abubakar and Ali at the Next Door Beach Resort does not mean they came to a meeting to conspire to overthrow a government as you want the court to believe,” Counsel pushed.

“My lord that is not true. Ali even contributed to the meeting and he also wanted to know the main man behind the coup plot,” Sule told the Court. 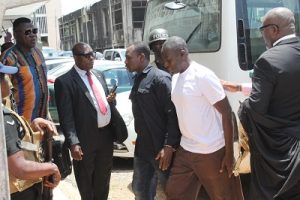 Mr Adawudu again challenged that the day of the said recording was a working day as well as compared the time of the video recording to that of the one on the recording device, which indicated that his clients were on duty, but Sule said the recording was at about 1500 hours showing that they had by then closed from work. “It was afternoon time and they came to the meeting,” Sule added.

He reiterated that the recordings were done with the original time of the device which was not tampered with.

Lawyer: “I am suggesting to you that Abubakar and Ali came to Next Door Beach Resort at the invitation of Corporal Sylvester Akanpewe to have a drink and not for any meeting as you want the court believe.”

Sule: “That is not true. Akanpewe is part of the executives and he was tasked to recruit soldiers and that was why he brought three soldiers,” but counsel told him that what he was telling the Court was an afterthought.
“I am suggesting to you that all these three videos I have mentioned all that Akanpewe said was allowances and nothing else,” Mr Adawudu put it in.

However, Sule said “It is true that Akanpewe mentioned allowances because he also brought soldiers and needed the soldiers to get theirs.

And it was not only about this meeting that Akanpewe attended, but also another at Laskala, which discussed how the route would be blocked, Sule said.

Counsel later cross-examined Sule on the map for the alleged coup plot.

They have been charged for varied offences such as conspiracy to commit crime, high treason, abetment of crime and possession of arms.

They have denied the charges and are being tried by a three-member-judge panel.
GNA