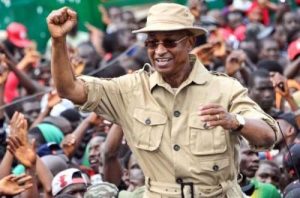 Guinea’s main opposition leader has welcomed Sunday’s ousting of President Alpha Condé calling it an opportunity for a new beginning for the country.

Cellou Dalein Diallo said the army had made “a historic act that completes the fight” started by pro-democracy groups.

He urged the army to ensure there was national reconciliation.

The UN, African Union, and regional body Ecowas have condemned the coup saying that constitutional order should be restored.

They have also called for the release of President Condé who was last seen on Sunday surrounded by the army’s special forces.

The coup leader Col Mamady Doumbouya told reporters on Monday that the ousted leader was in their custody and was safe.

Normalcy returned in the capital, Conakry, on Tuesday after the unease that followed Sunday’s coup, journalist Ali Hassan Salleh told the BBC’s Focus on Africa programme.

He added that people in opposition areas have also welcomed the dismantling of security check points which were put up by Mr Condé’s administration to crack down on protests against him.

The ousted leader was initially elected in 2010 in the country’s first democratic transfer of power.

Despite overseeing some economic progress, he has since been accused of presiding over numerous human rights abuses and harassment of his critics.

In a statement on Monday, Mr Diallo, who once served as Guinea’s prime minister, called the coup “a victory of our people and the failure of the dictatorial regime”.

He said the takeover “completes” the work of his National Alliance for Democratic Alternation party and other pro-democracy groups.

The opposition leader said he would back the coup leaders in their fight against corruption and impunity, urging them to work together to “build a peaceful democracy in our country”.

The coup has been widely welcomed by Guineans, hundreds of residents in the capital Conakry cheered on soldiers after it was confirmed that they had ousted Mr Condé’s.