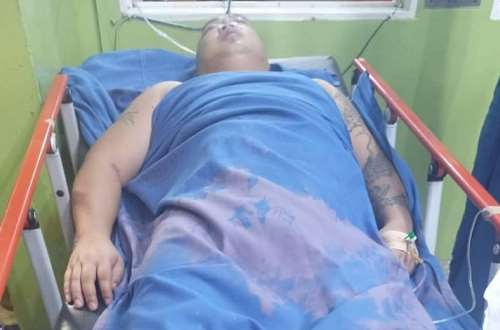 A 37-year-old Chinese national is battling for his life at the 37 Military Hospital after sustaining three gunshot wounds at the KTV night club in Tema.

Victim, Xu Rongsheng was shot thrice in his lower abdomen and the right buttocks by his attackers.

Police in Tema have arrested Luo Chuan but Jiang Yonghong is currently at large.

They have been charged with conspiracy to commit crime, namely attempt to commit murder contrary to section 23(1) and 48 of Criminal Offences Act 1960, (Act 29).

Information available to DGN Online indicates that on August 4, 2021 at 11:55pm, the victim and his brothers went to KTV Night Club which doubles as a Casino at Community 6, Tema.

Whilst at the premises, victim alighted walking towards the entrance of the KTV building when Luo Chuan and Jiang Yonghong came out from the night club wearing a black and white t-shirts respectively and in a spur of a moment and to their dismay Jiang Yonghong wielding a pistol shot thrice at the victim, Xu Rongsheng.

Victim was rushed to the 37 Military Hospital in Accra where he is currently receiving medical treatment.

On August 5, 2021, a complaint was lodged with the Criminal Investigation Department of the Tema Regional Police Command and investigation was initiated into the case.

Police visited the victim at the hospital and found him responding to treatment.

Upon intelligence, on August 7, 2021, one Lin Li Han was arrested when he tried to move the vehicle they used for the operation.

Luo Chuan who was in charge of the vehicle on the day of the incident was arrested.

Meanwhile, in the course of the investigation, a Close Circuit Television (CCTV) footage captured both Luo Chuan and Jiang Yonghong seen walking into the Lexus vehicle and drove off after committing the offence.