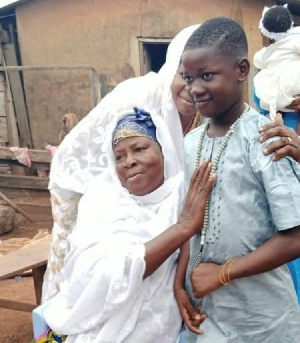 GhanaWeb has intercepted a heartwarming photograph of 10-year-old Ishmael Mensah, who was murdered by two of his friends at Coca-Cola, near the Great Lamptey Mills School, a suburb of Kasoa in the Central Region of Ghana.

Two teenagers allegedly lured Ishmael into an uncompleted building under the guise of selling him a video game and in the process, allegedly hit his neck with a club and later cement blocks, until he died.

Frank Mensah Blanger, the father of the deceased, told GhanaWeb’s Ekow Arthur-Aidoo when he visited the family on Sunday, April 4, that he is ready to pursue the case to its logical conclusion.

Mensah Blanger who works in the Oti Region, far away from Kasoa, informed GhanaWeb that his son called him on Friday, saying that he misses him so he should try and return home.

Mensah Blanger said that he told his son not to worry and that when he gets the chance from work, he will come to Kasoa and see them.

“I set off from Oti Region to Kasoa very late and arrived in the morning. When I arrived, they were asleep so his mom woke him up to inform him about my arrival. Immediately he heard that, he woke up from his sleep and came to hug me.

“I asked what he’s got for me, he brought out an egg saying they kept it for me. I took it, his mother prepared breakfast for us. We all ate together, I told him I was tired because of the long journey so I wanted to rest for a while,” Mensah Blanger narrated.

He continued, “One of the sons of my neighbour then came and told him he is wanted by his [the friend’s] elder brother. But, instead of using the route in front of the house to the place, they used the back route and went to the uncompleted building close to my neighbour’s house, where the incident happened.

“Around 10 am, my wife called me while I was sleeping, saying that my son has been murdered. I screamed ‘what!’ And asked her how is that possible because we finished our breakfast not long ago. I rushed out of my room to where the incident was said to have happened and indeed, I saw the lifeless body of my son lying in cold blood and the suspects were already going to bury him by themselves.

“The brother of one of the “murderers” informed their dad about the incident and quickly, he brought them to the house and asked them to give an account of the incident. A lot of people came to the house to sympathise with us after news of my son’s demise.”

Below is a photo of the late Ishmael Mensah.

During the first sitting of the Awutu Ofankor District Court hearing the murder of 10-year old Ishmael Mensah, police said that one of the suspects was moved by the instant wealth claims of a spiritualist he watched on a TV programme.

The prosecutor told the court that first suspect had a discussion with the second suspect, who intimated that he also knew another spiritualist in the Volta Region.

The duo, who contacted the spiritualist were instructed to provide a human being and a cash amount of GH¢5,000 for rituals to be performed that would make them rich, the court heard.

“Second accused who is not having a phone provided [the] phone number of the said spiritualist to the first accused who has access to his mother’s phone. After contacting the spiritualist, she agreed to help if only they can provide a human being and cash sum of ¢5,000 for the rituals,” parts of the prosecutor’s facts read.

The court also heard that the two suspects initially planned to kidnap the deceased and take the amount from his family to be presented to the said spiritualist for the rituals but later changed their minds.

The death of Ishmael Mensah on Sunday, April 3, shocked residents around the Great Lamptey Mills School, a community near Kasoa in the Central Region.

The two suspects are facing provisional charges of conspiracy to committing murder and murder.

They pleaded not guilty. The court is presided over by Her Worship Rosemond Vera Ocloo. The court has placed the accused persons into custody. The court will sit again on the case on April 20.

Tags: Heartwarming photo of the 10-year-old murdered by his friends at Kasoa