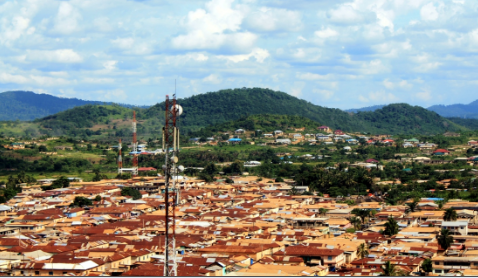 A 43-year-old man has been arrested by the Obuasi District Police Command after inflicting cutlass wounds on four of his family members.

Isaac Wiredu, is reported to have attacked his family members over a land dispute after he was questioned for cutting down a guava tree.

One of the family members, Mary Arthur, said that the family, who all live at New Baakoyeden in Obuasi, Ashanti Region, had no grudge with Isaac prior to the incident.

The 61 year old said that following a confrontation on why he cut off the guava tree, Isaac walked away, only to come back with a machete and launched the attack at herself and three of her children.

She noted that various parts of their bodies were slashed multiple times in the process.
The victims were however rushed to the St Jude Hospital in Obuasi where they were treated for their deep wounds sustained.

Meanwhile, three of the victims have been discharged, but Madam Arthur is still receiving medical attention.

Confirming the incident, the Obuasi District Police Commander, DSP Martin Asenso, said a report was made by the victims where they proceeded to arrest the suspect.

He added that the suspect is currently on remand assisting police investigations.

DSP Asenso revealed that, the man had earlier visited the police station to lodge a complain that his family members were invading his privacy.