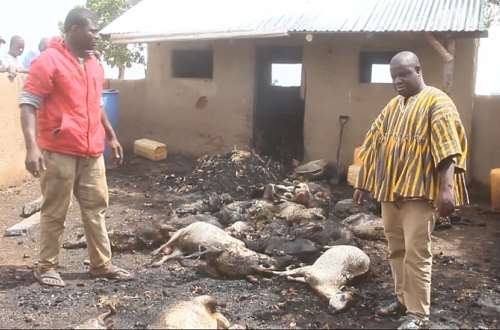 An animal farm belonging to one John Aminda, has allegedly been set ablaze by unknown arsonists at Kusanaba, a town near Zebilla in the Bawku West District.

About 36 sheep, hens and guinea fowls were burnt to ashes.

The farmer, John Aminda said he was devastated when he visited his farm only to find it on flames. He noted that he does not even know where to start life all over after losing something he has laboured for so many years.

John Aminda added that he was once attacked by some criminals one night on his farm but later reported the case to the Binaba Police for investigation.

His fear is that once the perpetrators have succeeded in setting his farm ablaze, no one knows what would happen next to him and his family.

A resident, John Akumbole who was also at the scene called on other community members to report criminals living among them to the appropriate authorities.

Komisah Ndeogo, a subchief of the community, Anosgoua who visited the site invoke curses on persons who committed the crime.

He called for calm as the police step in to pursue the criminals.

The Police Command has since visited the site and urged residents to remain calm as they commence investigation.

NADMO and the Agricultural Department of the Bawku West District were also at the scene to collect samples of the burnt farm.