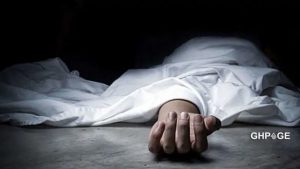 A 46-year-old man who reportedly stabbed his wife, Adiza Ibrahim, to death at their home at Breman Asikuma in the Central Region, over a misunderstanding has also died.

The suspect, Kwesi Kumi, died while on admission at the Apam Government Hospital after taking in a substance suspected to be poison.

Police say he died around 8.00 pm on July 7, 2021, and his body has since been deposited at the same hospital mortuary pending further action.

Earlier, reports indicated that the suspect locked his wife in the room after stabbing her and bolted, leading to her death.

He was later arrested and put on admission at the Apam Government Hospital when it was realized that he had taken in a poisonous substance.

The body of the wife has been deposited at the ‘Our Lady of Grace Hospital’ Mortuary for autopsy.