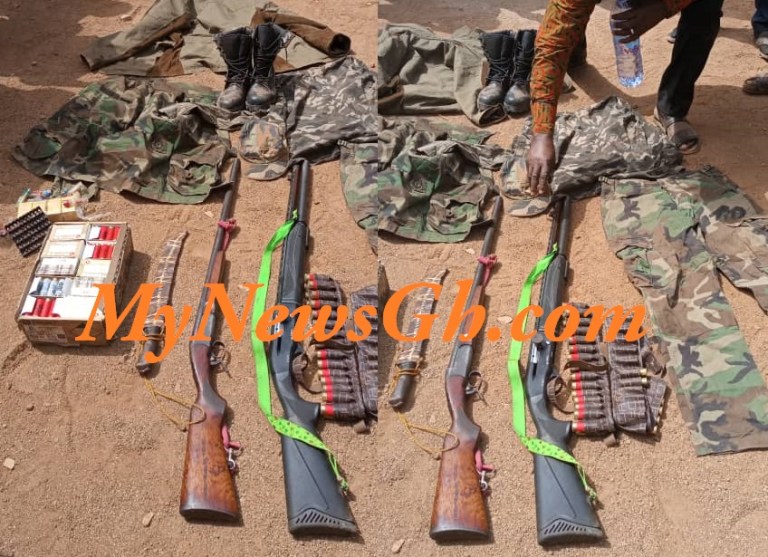 Police have upon a tip off arrested some Yarigabisi Zuarungu -based armed robbers Sunday Nia and Ishmael Yetinga who were the armed robbery gang who attacked and robbed one Anafo Charles of huge sums of money some time ago.

The leader of the gang one Yaw Bapila alias bodyman, who police were almost closing on vanished right before their eyes when he saw them approaching.

Police remain hopeful he will be nabbed soon, MyNewsGh.com was told.

The gang of notorious robbers attacked and robbed Mr. Anafo at gunpoint of his cash the sum of Gh¢78,000 and a Nokia phone with Mobil le Money Merchant balance of Gh¢30,000. The gang also stole his Samsung A10s mobile phone valued at Gh¢4800 and infinix hot 8 mobile phone valued Gh¢699 as well as a bunch of keys.

Investigation revealed that the robbery was orchestrated by one Yaw Bapila also known as ‘Bodyman’ who led other robbers that included Nia Sunday.

When police arrested Nia Sunday, he then led police to the house of Yaw Bapila and while the police were on the way to arrest Yaw Bapila, upon seeing the police van from far, he and three other colleagues suspected to be members of the robbery gang jumped on two motorbikes and sped off.

Police immediately conducted a search of Bapila’s room in the presence of his wife Patricia Basanatam and found two pump action guns, a box and two roll of cartridges, a knife, military boot, two military uniforms and caps with two DV plates.

The Police extended their enquiries to Gbani and arrested suspect Yentinga Ishmael who is also alleged to be part of suspect Yaw Babila-led group.

Police are making efforts to arrest the lead robber and his accomplice to assist in investigation.