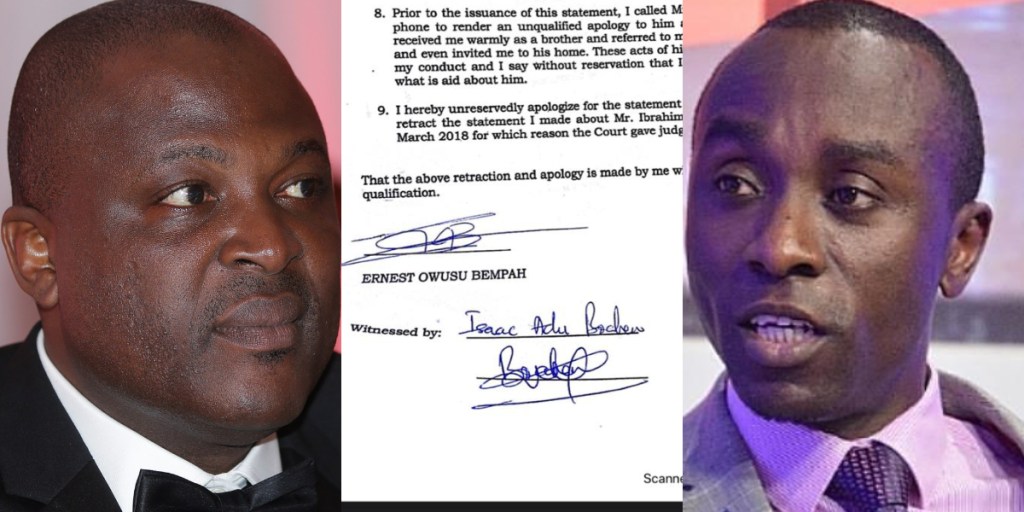 The Communications Director of Ghana Gas, Ernest Owusu Bempah has written an official apology to businessman Ibrahim Mahama over comments he passed against him which a court ruled as defamatory and fined him as a result.

In a two-page apology letter intercepted by MyNewsGh.com, Owusu Bempah begged Ibrahim Mahama to forgive him as “I had no reason to make the allegations which I ought not to have made”.

Mr. Owusu Bempah added that the statement he made against the award-winning CEO of Engineers & Planner “were untrue then, are untrue now and will never be true” for which he apologizes.

Consequently, Mr. Owusu Bempah placed a call to Ibrahim Mahama to apologize to the businessman and was received well. Mr. Ibrahim Mahama has since invited him to come home and called him “my brother”.

MyNewsGh.com has attached the full apology for our readers.

This apology will come as a surprise to the public since Mr. Owusu Bempah had earlier claimed his lawyers were headed to the Supreme Court to challenge the judgement given against him in a defamation case against the business mogul.

The super-rich CEO of Engineers and Planners who is also brother of former President of Ghana John Dramani Mahama, Ibrahim Mahama sued Ernest Owusu Bempah, Communications Director of Ghana Gas Company Limited and Despite Group of Companies GH¢2 million each for defamatory comments but the judge awarded GH¢300,000 instead against Owusu Bempah.

An Accra High court ordered the bankers of Owusu Bempah to pay the amount to Mr. Ibrahim Mahama, which effectively emptied his bank account.

A process was initiated to sell his house in Tema to defray some of the debt.

With Ibrahim Mahama accepting his apology and inviting him, the matter is now likely to rest.