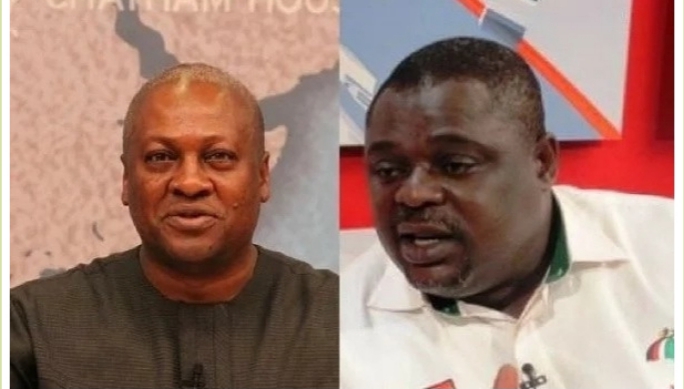 The Chief Executive Officer of the Atta Mills Institute, Mr. Samuel Koku Anyidoho has charged former President John Dramani Mahama to caution his supporters to desist from the continuous verbal assaults and name-calling against him on social media.

According to him, the former President is the only person he can draw his attention to and plead with regarding this situation as those fanatics are attacking him [Koku] in his (Mahama’s) name.

“I will not go deep into that issue but I have just put out a piece of information. Those people who continue to say they will insult me on social media should just be careful. They continue to use the name of John Mahama to insult me; they should just stop it. We don’t want to dirty ourselves in public; that is all but if they don’t stop, they will hear what they don’t want to hear”, he warned.

Brimming with anger at the continuous aspersions against his person, even to the extent of accusing him of murdering his own daughter for ritual purposes, Koku Anyidoho vowed to turn the heat on his attackers should the abuse not cease.

“I have had enough of them; I have had enough of 10 years of name-calling, and insults for no apparent reason, to the extent that they can say that I killed my own daughter for ritual purposes. They should stop it, that is all. My plea, President Mahama this morning; your Excellency President John Mahama, I am pleading with you, the people who insult me in your name, let them stop it, otherwise….

“I have been advised a lot over the weekend and that is why I am just saying that I will not say much again. I have just begged the former President that we should allow sleeping dogs to lie. The boy who insults me openly in his name; I never disrespected him when he was the Vice President. There is no evidence to that effect but for 10 years I have suffered. President Mahama, I beg you, tell those boys to stop; they do it in your name and openly so. Please, let them stop or else”, he cautioned in his plea.

Tags: Tell your boys insulting me openly in your name to stop - Koku Anyidoho tells Mahama