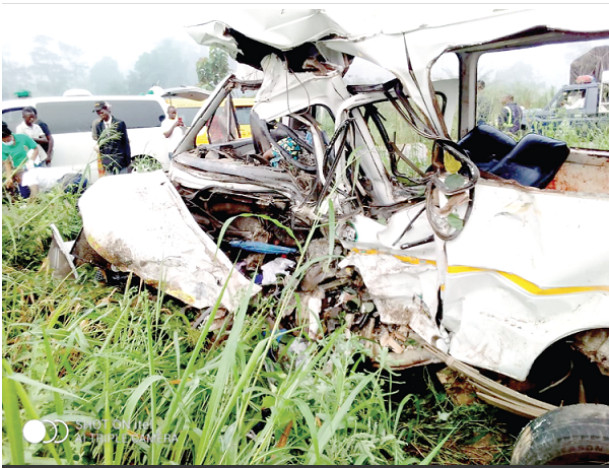 Three more people have died in the gory vehicular accident that claimed 17 lives on the spot on the Kumasi to Offinso road in the Ashanti Region on Monday.

The deceased were among the 16 severely injured receiving treatment at St. Patrick’s Hospital in Offinso and transferred to the Komfo Anokye Teaching Hospital in Kumasi but could not survive.

The Offinso Divisional MTTD Commander, DSP Edmund Nyamekye confirmed the deaths saying “unfortunately we lost three more victims. The driver of the sprinter bus as we are well aware died on the spot. The driver of the articulated truck however was severely injured, per my checks this morning, he has been transferred from the St. Patrick’s Hospital in Offinso to the Komfo Anokye Teaching Hospital.”

The 17 victims were buried in a mass grave at a cemetery at Offinso on Tuesday, barely 24 hours after the crash.

Sixteen out of the 17 deceased people were Muslims so they were buried according to Islamic traditions and customs.

The other person, who was said to be a Christian, was however buried according to Christian traditions and customs.

The deadly accident happened when an articulator truck veered from its lane and crashed into an oncoming Sprinter bus full of passengers on Monday around 3am.

The impact of the crash was said to be so strong that 17 people, including 14 females and three males, died on the spot and about 16 others, were hospitalised.

According by DSP Nyamekye, police had information of an accident on the outskirts of Offinso, to be specific, the Abofuor Forest, around 3am.

Police personnel, he said, were quickly dispatched to the scene and they found a mangled Sprinter bus and an articulator truck.

The police capo said the truck, registered GS 4339-17, was from Techiman to Kumasi and the bus was from the opposite direction.

DSP Nyamekye recounted that some of the injured people were trapped in the mangled bus so police and fire service staff rescued them.

According to him, the driver of the truck, who was in critical condition and the other injured people were rushed to the hospital.

DSP Nyamekye said police managed to move the two cars from the scene to the police station in order to ensure free movement of other vehicles.

Meanwhile, investigations into what may have led to the bloody accident is underway, a police source disclosed.