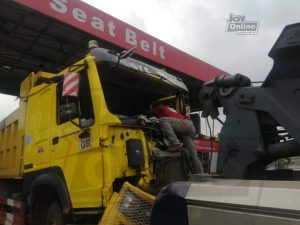 A tollbooth attendant is reportedly dead, while another is in critical condition after a tipper truck run into the Tema motorway tollbooth, Monday, .

A viral video of the crash sighted by GhanaWeb shows many onlookers at the scene in an attempt to rescue the victims who seem trapped in the smashed tollbooth.

An attendant, who is visually and hearing impaired, is also said to have sustained serious injuries after he was pulled out of the debris.Some tollbooth attendants were also seen wailing.

An eyewitness, Kingsley Dunyo told Citi FM that, “I was on the Spintex-Roadside, but a few meters away from the toll booth, I saw the tipper driver rushing to the booth at the Tema side. The rate at which he was speeding showed that something was definitely going wrong. Either his brake had failed or he was an inexperienced driver.

“By the time we realized, he had run into the toll booth, killing the attendant. So, one of the attendants is dead, and the other is heavily injured.”

On his part, Chief Supt. William Asante, Tema Regional Commander of the Police Motor Traffic and Transport Department (MTTD), explained on Citi FM, [the] “vehicle had stopped to pay the toll and then the tipper-truck driver carelessly on its part ran into the booth.”

“This is the result we are witnessing now. It is a serious accident…Some people have sustained varying degrees of injuries and have been rushed to the Tema General Hospital,” Chief Supt. Asante added.l

Watch the video below.