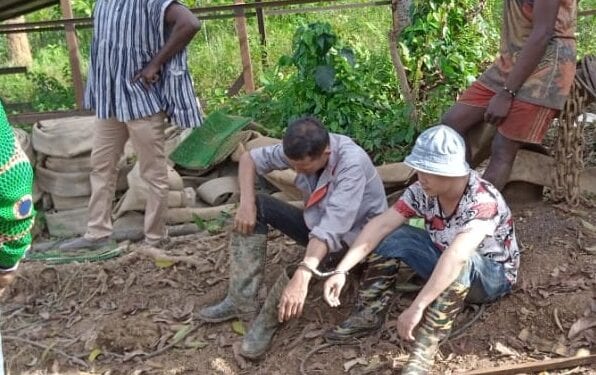 The Nzema East Municipal Security Council (MUSEC) has arrested two Chinese nationals together with two of their Ghanaian conspirators at a newly developed illegal mining site at Gwira Kwekukrom.

Municipal Chief Executive for Nzema East Frank Okpenyen, who led the operation, told Connect FM that the four were arrested following intelligence they picked from their sources.

“Since government’s renewed fight against galamsey began, we have been restless and are always on the lookout for any person or group of persons who are engaged in galamsey

“And since we cannot be everywhere all the time, we have collaborated with several sources to be on the lookout for these unpatriotic citizens. And so on Monday we had a tip-off and acted on it. The intelligence proved vital and that lead to the arrest of two Chinese and two Ghanaians.”

He continued: “We were shocked when we came to meet that a new site had been developed in the thick vegetation somewhere at Gwira Kwekukrom where the suspects were busily mining.”

“These people had set up a new camp and few meters away 3 excavators were busily working. And already the excavators had cleared a huge size of the vegetation. You could easily tell that the site was new. We were so shocked as to how these people will have the verve to do what they were doing when the campaign against galamsey is at it peak; when soldiers are moving round burning excavators and other mining equipment,” he said

The MCE said the MUSEC team seized 16 gallons of diesel, one water hose, one Changfan motor and a fuel pumping machine.

“We also saw three excavators on site and efforts are underway to move them away from the site.”

In the meantime, the four suspects have been handed over to the Regional Police Command for investigation and prosecution.

Frank Okpenyen asserted that MUSEC will continue to expand the operations with the singular aim that all illegal mining is brought to a halt in Nzema East.

“We spent more than 6 hours trying to locate the place where the galamsey was ongoing. In the process we lost our way several times. But we were relentless. These people always try to be smart.”

But he warned that “we will not rest. We will pursue them no matter where they are and no matter the level of sophistication and smartness. Until they stop, will will also not stop”.

“…we are coming after you, we will arrest you and make sure that the law deals with you decisively,” he charged.