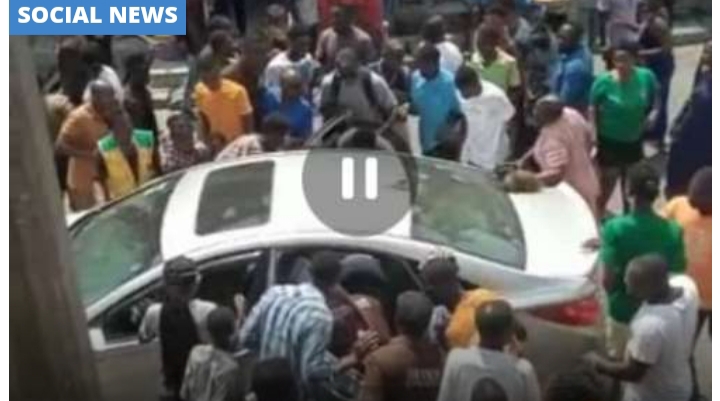 It has emerged that the lady who was with the man that was fatally shot and killed by armed robbers in Takoradi in the Western Region recently, might not be the wife of the deceased as earlier perceived.

Monica Nda and Charles Kwakye were the occupants of a private car Mr. Kwakye was driving when the armed robbers intercepted them at Amanful, a surburb of Takoradi and robbed them of the cash they had withdrawn from the bank before shooting him, leading to his death.

The woman also got injured during the robbery attack and was admitted to the hospital, and when the police visited her, she told them that the deceased was her husband and that they all came from Switzerland to monitor their housing project.

In the ensuing heat, another woman by name Akosua Dufie, who is domiciled in the United States, has resurfaced claiming that she is rather the bona fide wife of the deceased.

Akosua Dufie claimed on Peace FM that she got married to the man on August 11, 1984 and had four boys with him and both of them were living in the United States.

She said Nda, who is claiming to be the wife of the deceased, did not even know the age of the man, insisting that the late Kwakye was 63 and not 61 years as stated by her supposed rival.

She said the woman was rather the girlfriend of the deceased and that her husband told her he was going to Accra only to hear later that he had been shot dead in Takoradi.

According to the police, on April 12, 2021, at about 2:45pm, they received information that there was a shooting incident at Amanful, a suburb of Takoradi and that the victim had been rushed to Takoradi Hospital.

The police rushed to the hospital and found a male adult aged about 61 years and identified as Charles Kwakye lying dead at the hospital morgue with a gunshot wound at his chest.

According to the police, Monica Nda, 45, who claimed to be the wife of the victim, also sustained a cut on the face and was met at the casualty ward of the hospital responding to treatment.

Investigations disclosed that the victim Charles Kwakye is resident in Switzerland with the wife, Monica Nda.

“They came to Ghana about two weeks ago to monitor their building project at Mpintsin near Takoradi,” the police revealed.

They indicated that on that fateful day at about 1pm, the two went to Takoradi Amanful area to buy some building materials after withdrawing money from a bank.

Whilst in their Hyundai Sonata private car with registration number GE 4022-16 parked at Amanful near Anaji trotro station, they were accosted and attacked by six armed men on two motorbikes.

According to the police, there was a struggle between the victim and the robbers.

The robbers shot the victim at the right chest and bolted with the bag and its contents. The victim was rushed to Takoradi Government Hospital but died shortly on arrival.

Tags: Two women ‘fight’ over man who was shot dead by armed robbers in Takoradi