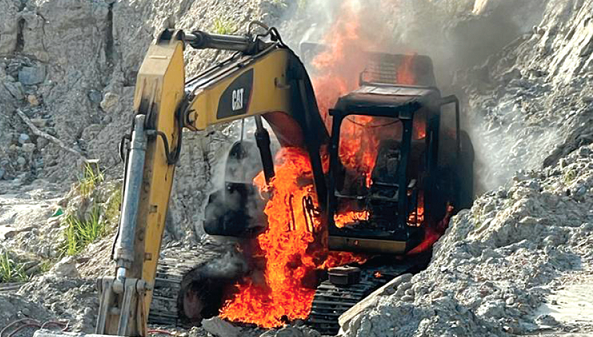 Chairman of the Eastern Regional Security Council, Seth Acheampong, says individuals whose excavators have been burnt as part of ‘Operation Halt’ activities by the military to stop illegal mining will be prosecuted and jailed.

He says the fight against illegal mining will not end with the destruction of equipment alone.

Seth Acheampong, who is the Eastern Regional Minister, told Joy News the government will go after individuals involved in the illegal trade.

“The determination is going beyond just burning excavators. Pretty soon, you will see people being prosecuted. People will be put behind bars. This is a war. Ghana is at war with people who want to destroy public property and our national assets,” he added.

Mr Acheampong assured that not even members of the governing NPP will be shielded if found culpable after investigations.

“Madam Gate Gyamfua you mentioned, investigations are still ongoing. She is our own. If we were to be having nine-day wonder, the operatives would not have touched here. But this tells you the seriousness with which the Commander in Chief’s orders are being carried out… Any person who falls within the perimeters… will be touched.

“Nobody is above the law… Ghana must succeed. We cannot continue in this endeavour. We need to bring this to a halt at a point in time,” he added.

Mr Acheampong said the decision to burn excavators is in the right direction despite criticism that the law requires the state to rather confiscate such illegal equipment. He described as horrible the impact of illegal mining activities on the lives of the people as it has made water scarce in some areas in the Eastern Region.

“At a point in time, Ghana Water Company had to shut down their treatment systems because the turbidity level is so high it was going to endanger and destroy their machines… Water is food. And when cyanide and mercury enter our water bodies, it’s going to kills us,” Mr Acheampong observed.

He said agriculture, which is the backbone of the local economy, is also at risk because of the activities of illegal miners, adding that there is the need to protect peasant farmers who earn their livelihood from farming activities.

“Our cocoa beans are infested with mercury. And this is bringing the soul of our country down and we are determined to fight this canker. It cannot continue this way. We cannot live as a people who are irresponsible,” he added.

Tags: We’ll prosecute individuals whose excavators have been burnt – Minister