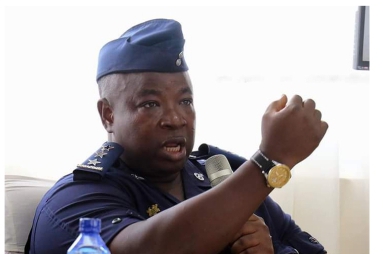 According to the news portal, the now infamous DSP Azugu was fed up with the negative publicity he has come to be recognised with during his tenure in office Commanding the Special Weapons and Tactics (SWAT) Unit of the National Security and looked forward to be transferred.

As reported by The Fourth Estate, the sources within the National Security say DSP Azugu, prior to his removal, had been lobbying for his transfer back to mainstream policing work.

Apparently, he had lost control of the SWAT team who had become notorious for human rights violations.

“Since DSP Azugu, like other trained police officers, cannot insist on professionalism when there are ‘orders from above’ to be obeyed, he had been lobbying to get out of the place in order to save his face,” The Fourth Estate reported.

DSP Azugu was thrust into the limelight following his appearance at the Emile Short Commission hearing following his involvement in the Ayawaso West Wuogon bye-election violence in 2019.

The election held on January 31, 2019, was relatively peaceful till masked and heavily armed operatives of the National Security’s SWAT team invaded the La Bawaleshie polling station.

Several voters suffered varying degrees of injuries from beatings they received from the masked men and bullet wounds.

At the Commission of enquiry, which was set up barely a week after the incident, DSP Azugu told the Commission chaired by Justice Emile Short with Professor Henrietta Mensah-Bonsu, Patrick K. Acheampong, and Ernest Kofi Abotchie as members, that the operatives were masked “because of mosquito bites. To prevent mosquitoes from biting our ears and faces,” February 18, 2019.

The Emile Short Commission subsequently released their report suggesting, among other things, that DSP Azugu be reassigned to the Ghana Police Service, his mother organisation.

Two years on, Azugu was still heading the SWAT team.

This came to light once again when he led a team of National Security operatives to the premises of Citi FM/TV in an attempt to capture journalist, Zoe Abu-Baidoo, for her alleged involvement in breaching National Security protocols.

Her colleague, Caleb Kudah, who had been arrested earlier at the premises of the National Security Ministry, had allegedly been severely assaulted by operatives there.

The general public, appalled at how the National Security handled the whole situation, demanded the dismissal of the operatives involved, especially DSP Azugu, who was already well known.

However, sources at the National Security told The Fourth Estate that DSP Azugu was not involved in the Caleb Kudah assault; thus, his removal from the SWAT unit cannot be attributed to that incident.

Meanwhile, The Fourth Estate, in a recent publication, has reported that DSP Azugu was once again involved in a rogue raid on two Chinese Casinos in Asankragua in the Amenfi West constituency of the Western Region, where operatives aside arresting Chinese citizens there had gone ahead to assault staff of the casino and two other journalists.

The operatives are also reported to have pocketed several dollar bills they discovered in the Casinos without having them recorded.

Tags: Why DSP Azugu jubilated after his removal from National Security