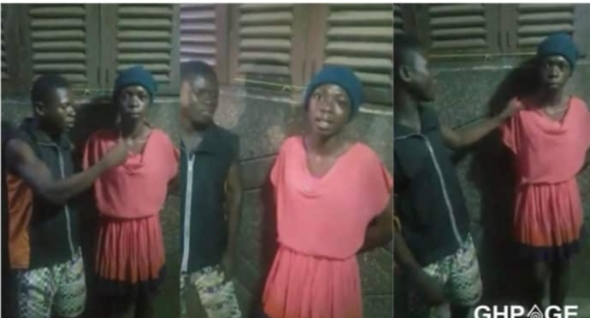 It’s sad what the world has turned into as poverty has driven people especially the youth to involve in despicable acts.

GhPage.com has chanced upon a heartbreaking video of a young boy who dresses like a girl to seduce boys to have sex with him for money.

In the disturbing video, the 15-year-old boy narrated that he was introduced into the gay act by his friends after he complained about his poor state.

According to him, his father abandoned him at a very tender age and his mother is currently unemployed so he needs to fend for himself.

The young boy indicated that he was coerced by his friends to dress like a girl and sleep with men for money.

He revealed that he wasn’t willing to involve himself in homosexuality but after much persuasion, he decided to do it for the money.

He further revealed that he has had sexual intercourse with four men in exchange for money.

The young boy was caught after one of his clients who he slept with exposed him after he found out that he was a boy in girls clothing.

Watch the video below;

This video has garnered massive reactions from social media users who are saddened by the atrocities these young ones are being misled to do.

the_littler_gordons wrote; “Aww poverty and irresponsible parents are the reason such things go on”.

prince.1 added; “We need to start holding parents who know their pockets and still go on to have kids they can’t promise a better future”.

stylengraace commented; “This is unbelievably devastating. Where are the child’s rights protective services now?

rhoda.blay had this to say; “I’m actually in tears. This is very sad. Can’t imagine my little brother (same age in this situation). Let’s pray for the young ones”.

Osaslui wrote; “Lots of young people are deceived and lured into this gay act because of circumstances. Most of them it’s not their intention but when they enter into it, it becomes difficult for them to come out and they later become comfortable doing it, That’s when their mindset think they are born to do that. Very sad! Handsome young boy who has been misled”.

nanaop_gh added; “This is very sad such a young boy who is supposed to be in school at this age. Poverty is wicked”.

ca_frempomaa stated; “This is really sad and heart breaking”.

Tags: Young boy turns into a girl to seduce fellow boys out of poverty