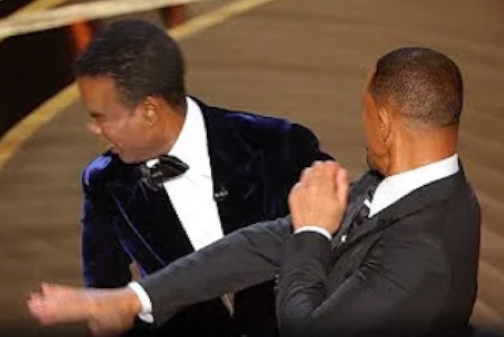 Jada Pinkett Smith looked unamused when Oscars presenter, Chris Rock said to her: “Jada, can’t wait for GI Jane 2,” in an apparent reference to her shaved head and a 1997 film in which Demi Moore’s character sports a buzz cut.

Moments later, Jada’s husband, actor Will Smith, walked on stage and slapped Chris Rock before returning to his seat and shouting: “Keep my wife’s name out of your [expletive] mouth.”

Shortly after the incident, Smith was seen apparently being comforted by actors Denzel Washington and Tyler Perry. Later during the event, Will Smith won his first ever Oscar for best actor in King Richard.

Smith earned the award – his first – for his portrayal of Richard Williams, the father of tennis legends Venus and Serena Williams, in the film King Richard.

In a tearful acceptance speech, he apologised to his fellow nominees and said “love will make you do crazy things”.

The incident cast a shadow on what should have been Hollywood’s biggest celebration. The Oscars film academy condemned Will Smith for slapping Chris Rock at Sunday’s ceremony, and has launched a formal review of the incident.

The statement from the Oscars organisers said: “The Academy condemns the actions of Mr Smith at last night’s show. We have officially started a formal review around the incident and will explore further action and consequences in accordance with our Bylaws, Standards of Conduct and California law.”

Some social media users seem to suggest that Will Smith’s actions could have violated the Academy’s code of conduct and wondered whether Smith would be asked to return his award for Best Actor, which he collected onstage.

The code states the Academy is “categorically opposed to any form of abuse, harassment or discrimination”, including members acting “in a manner that violates standards of decency”.

It also reserves the right for the Academy board to suspend or expel those in violation of the code. Chris Rock declined to press charges and has not commented publicly about the slap.