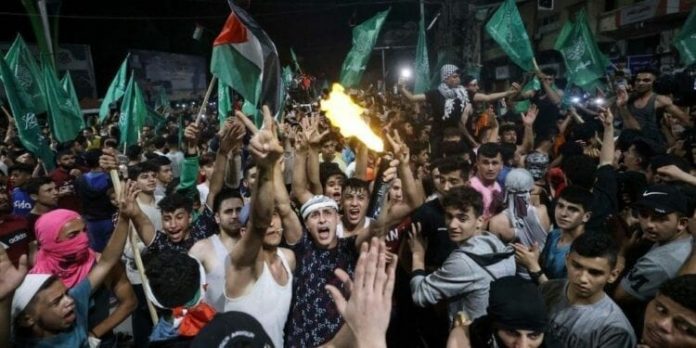 The ceasefire began early on Friday, bringing to an end 11 days of bombardment in which more than 240 people have died, most of them in Gaza.

Palestinians poured on to the streets of Gaza soon after the truce began, while a Hamas official warned that its hands “are on the trigger”.

Both Israel and Hamas have claimed victory in the conflict.

On Thursday, more than 100 Israeli air strikes targeted Hamas infrastructure in the north of Gaza. Militants launched more than 300 rockets towards Israel during the day, the Israeli military said.

Fighting began in Gaza on 10 May after weeks of rising Israeli-Palestinian tension in occupied East Jerusalem that culminated in clashes at a holy site revered by both Muslims and Jews. Hamas began firing rockets after warning Israel to withdraw from the site, triggering retaliatory air strikes.

At least 232 people, including more than 100 women and children, have been killed in Gaza, according to its health ministry. Israel has said at least 150 militants are among those killed in Gaza. Hamas does not give casualty figures for fighters.

In Israel 12 people, including two children, have been killed, its medical service says. Israel says some 4,000 rockets have been fired towards its territory by militants in Gaza.

What have the two sides said?

The Israeli Political Security Cabinet said it had “unanimously accepted the recommendation” for a ceasefire.

“The political leaders emphasised that the reality on the ground will determine the future of the campaign,” the statement said.

A Hamas official told the Associated Press news agency that the ceasefire announced by Israel amounts to a “victory” for the Palestinian people and a defeat for Israeli Prime Minister Benjamin Netanyahu.

Soon after the ceasefire started at 02:00 on Friday (23:00 GMT Thursday), large numbers of Palestinians took to the streets of Gaza in cars and on foot to celebrate.

Loudspeakers from mosques pronounced “the victory of the resistance achieved over the Occupation during the ‘Sword of Jerusalem’ battle”.

But Basem Naim, from the Hamas Council on International Relations, told the BBC he was sceptical about whether the truce would last.

“Without justice for Palestinians, without stopping the Israeli aggression and Israeli atrocities against our people in Jerusalem, the ceasefire will continue to be fragile,” he said.

A member of Hamas’s political bureau, Ezzat al-Reshiq, issued a warning to Israel.

“It’s true that the battle ends today but Netanyahu and the whole world should know that our hands are on the trigger and we will continue to ramp up the capabilities of this resistance,” he told the Reuters news agency.

“We tell Netanyahu and his army, if you come back, we will come back.”

What did Biden say?

US President Joe Biden said he commended Mr Netanyahu in a phone call after the ceasefire agreement was announced.

He said the US – Israel’s closest and most important ally – fully supports the country’s “right to defend itself against indiscriminate rocket attacks from Hamas and other Gaza-based terrorist groups that have taken the lives of innocent victims”.

Mr Biden added that the Israeli prime minister shared his appreciation for Israel’s US-backed defence system, known as the Iron Dome, “which our nations developed together and which has saved the lives of countless Israeli citizens – both Arab and Jew”.

He also praised Egypt’s President Abdel Fattah al-Sisi for brokering the ceasefire, before turning to the human cost of the conflict.

“I send my sincere condolences to all the families, Israeli and Palestinian, who have lost loved ones and my hope for a full recovery for the wounded,” he said.

The president said the US “remains committed to working with the United Nations” in providing humanitarian assistance to Gaza and in reconstruction efforts in the enclave. He added that this would be done “in full partnership with the Palestinian Authority, not Hamas”.

President Sisi said he had received Mr Biden’s phone call with “utter happiness”, adding that they “exchanged visions around reaching a formula that would calm the current conflict between Israel and Gaza”.

I’ll continue to eat myself until I am ready to marry – Popular Kumasi se.x worker

Just like many sex workers out there, the lucrative nature of their trade usually discourages them from quitting and settling down until they are...
Read more
Local News

management of  hot digital online radio in U.k are in shock of the announcement of the deceased famous  loyal serial radio caller with name...
Read more

I’ll continue to eat myself until I am ready to marry – Popular Kumasi se.x worker

Just like many sex workers out there, the lucrative nature of their trade usually discourages them from quitting and settling down until they are...
Read more
Local News

management of  hot digital online radio in U.k are in shock of the announcement of the deceased famous  loyal serial radio caller with name...
Read more
Entertainment

The Ghana Football Association (GFA) has announced the sacking of Black Stars coach Charles Kwabla Akonnor. In a statement, the GFA said the 47-year-old and...
Read more
Load more