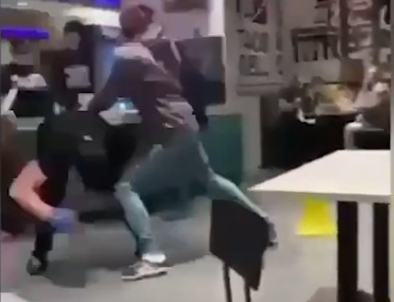 A video footage taken from inside the Swansea branch of a Taco Bell restaurant shows a man appearing to act aggressively and shouting at employees, while an older man attempts to restrain him.

The man was left unconscious on the floor after landing head first during an incident at the fast food restaurant on Monday, March 14.

He pulls delivery bags off a nearby table before running towards the counter and appeared to aim a punch at a staff member.

However, the worker anticipated the attack, and picks the man up over his shoulder before the attacker can land a blow. The man then falls onto the floor head first in front of horrified customers.

There were gasps from shocked onlookers as the injured man is rolled onto his back motionless and blood is seen streaming from his head and onto the restaurant floor.

Even though Police and the Ambulance Service were called to the incident, the men had left the restaurant on Oxford Street before officers arrived.

Taco Bell confirmed that it was aware of the incident, and that no further action would be taken against the employee.

A spokesperson for the restaurant chain said: “We are aware of the incident that recently occurred in our Swansea restaurant. The restaurant franchisee has fully cooperated with the police and no further action will be taken.

“We take the safety and wellbeing of our team and customers very seriously and do not tolerate any form of abuse in our restaurants and wider business.”