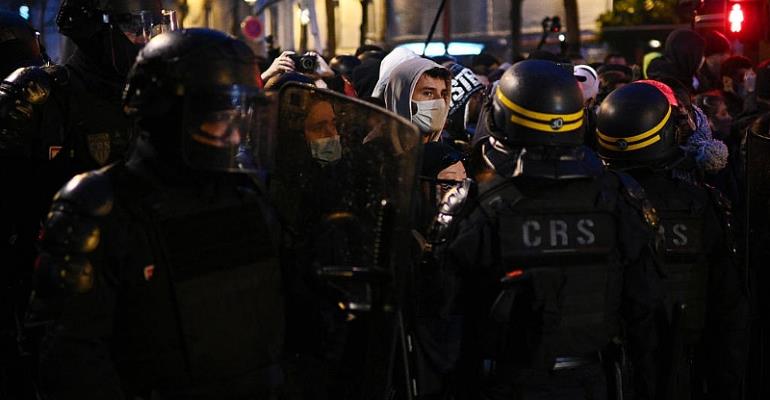 Thousands of people turned out in Paris and other French cities on Saturday to protest against the global security bill, labelled as a death knell to freedom of expression and the press.Police arrested over 100 people after some sporadic violent clashes.

There was a heavy police presence in the streets of the French capital, in a bid to prevent the type of  violent clashes which erupted at demonstrations in the past two weeks, blamed for the most part on members of extremist groups known as ‘black blocs’.

For the third week in a row, human rights groups, journalists and other advocates have turned out to express their anger against a proposed government bill which would curb press freedom.

“Global repression, total regression,” read a placard held aloft by one demonstrator, a reference to the new “global security” bill which bans the “malevolent” publication of images showing the faces of police officers in action.

Some ten thousand people marched through Paris, according to organisers, ending up at the Place de la République in the late afternoon.

In Lyon, where some two thousand people turned out, police fired tear gas after objects were thrown at them from the crowd.

In Lille, some tear gas was also fired to break up rowdy protesters.

Around a thousand people showed up in cities such as Montpellier, Marseille, Toulouse and Strasbourg.

Many of the participants carried banners reading “Stop killing our freedom,” while shouting “everyone hates the police”, a popular rally cry heard at demonstrations.

Critics argue that the security bill, which has been adopted by the lower house of parliament, will make it harder for journalists and citizens to document cases of police brutality.

Footage of white police beating up an unarmed black music producer in his Paris studio on 21 November amplified anger over the legislation, widely seen as signalling a swing to the right by President Emmanuel Macron.

Other incidents caught on camera have shown police in Paris using violence to tear down a migrant camp.

New summit on role of police
In the face of mounting protests, Macron’s ruling LREM party announced it would rewrite the bill’s controversial Article 24, dealing with filming the police.

But the announcement fell short of the mark for left-wing protesters and rights groups, who are demanding that the law be completely withdrawn.

The recurring allegations of police brutality have become a major headache for Macron.

In a letter to a police union leader on Monday, he announced plans for a summit in January on how to improve relations between the police and communities.

“There is urgent need to act,” Macron said in the letter to the Unite-SGP-FO police union, adding that the summit would also address the police’s longstanding complaints over working conditions.