Brazillian Police have arrested three men over the death of a Congolese man, Moise Kabagambe in Rio de Janeiro.

The death of the 24 year old refugee, sparked calls for justice and there was protests in major cities across the country. 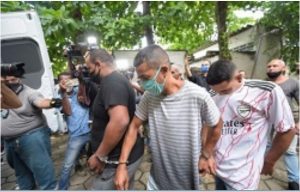 In a circulating video footage, Moise Kabagambe was tied up and held to the ground with sticks by the men.

Accounts by witnesses suggests Moise Kabagambe, who works at a drinks spot, was murdered after he demanded back payment of his wages.

Police chief Henrique Damasceno said the kiosk owner helped to identify the assailants by providing the security video and did not take part in the assault on the deceased.

Kabagambe arrived in Brazil 10 years ago as a refugee from the Democratic Republic of Congo and was studying architecture, according to his family.

“We want justice. He grew up here in Brazil. I can’t believe this happened,” his mother told reporters.