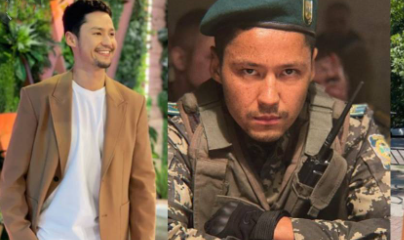 Popular Ukrainian actor and TV presenter Pasha Lee has died in battle as Russian forces bombarded the town of Irpin. He had signed up for Ukraine’s territorial defence force in the beginning of the conflict.

The 33 year old appeared in several films. His voice was used in the Ukrainian versions of The Lion King and The Hobbit.

He was born in Crimea in 1988 and had recently begun presenting a show on Dom TV, a Ukrainian channel originally aimed at audiences in the eastern areas seized by Russian-backed separatists in 2014.

Lee starred in TV talent shows Star Factory and X-Factor as well as a number of films including the 2016 release SelfieParty, involving four students who wake up in a police station after a night on the town, unaware of how they got there.

As a young actor in 2006 he starred in a teen-horror movie called The Pit but more recently featured in the comedy Meeting of Classmates.

He lived in Irpin, the town is 12 miles north-west of Kyiv and has been bombarded for days by Russian artillery, with shocking scenes of death, destruction and families rushing to escape.

Residents were able to get out of Irpin as well as the north-eastern city of Sumy on Tuesday as part of a Russian evacuation corridor, heading for the central city of Poltava.

Days before Pasha Lee was killed he posted a link to a Ukrainian refugee charity, urging people either to approach them for help or to volunteer.

In his final Instagram post he posted a photo showing him and a colleague with the cheerful message that they were smiling because “we’ll be ok and everything will be Ukraine”. He is one of a number of public figures killed in the Russian invasion.