West Midlands Fire Service has confirmed that a major gas explosion that destroyed a house at Dulwich Road, Kingstanding in Birmingham has resulted in the death of a woman.

A man rescued from the house by people at the scene also suffered life-threatening injuries in the blast which happened just after 8.30pm on Sunday.

Four other men who were discharged by paramedics suffered minor injuries from the blast which destroyed six other homes and properties.

Investigations at the scene are continuing after footage on social media showed flames engulfing the terraced red brick house.

The fire service and gas board have started investigation into what caused the explosion. Authorities know it was a gas explosion and it could be days before the exact cause of the blast is known.

The fire service praised the residents for their response for climbing past flaming debris and through rubble to save the injured man. 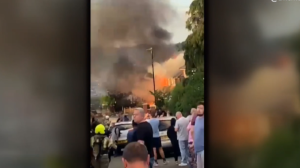 Debris was strewn across the street and one car which was upended has now been moved.

Fire investigators, working alongside specialists from the gas company, have begun sifting through the wreckage as they try to determine what caused the explosion.

Others simply couldn’t access their properties because the damage is so extensive.

Nearby Warren Farm Primary School was closed on Monday after the fire service said its windows were damaged.

West Midlands Police said Dulwich Road and surrounding roads were closed and would be “for a very long time”.

Cadent, the gas emergency service for the West Midlands, said its teams were on site as part of the multi-agency response and added its thoughts were with those affected.